You are here: Home / World / LOOK: US supercarrier fires Close-In Weapons System in the Philippine Sea

United States Navy Nimitz-class nuclear-powered supercarrier USS John C. Stennis (CVN 74) has fired a Close-In Weapons System (CIWS) during a pre-action aim and calibration test in the Philippine Sea February 19. “Providing a ready force supporting security and stability in the Indo-Asia-Pacific, Stennis is operating as part of the Great Green Fleet on a regularly scheduled 7th Fleet deployment,” the US Navy said.

Five of the seven US Mutual Defense Treaties are with countries in 7th Fleet area of operation which are Philippines, Australia and New Zealand, Republic of Korea, Japan, and Thailand.

“The Great Green Fleet (GGF) is a year-long, Department of the Navy initiative that demonstrates the sea service’s efforts to transform its energy use,” US Office of the Secretary of the Navy said. “The purpose of the GGF is to make our Sailors and Marines better warfighters, able to go farther, stay longer and deliver more firepower.” 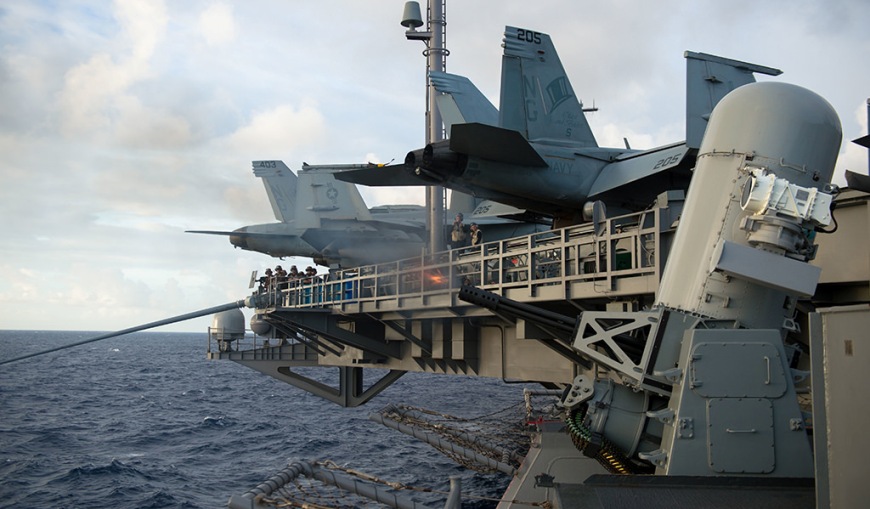 The strike group expects to participate in a number of exercises during this deployment; training, integrating and building capacity with allies in the Pacific region as part of an ongoing rotation of US forces supporting maritime security operations in waters around the world, the US Navy said.

“The Sailors of this strike group are ready, willing and able to go wherever is necessary to protect American interests,” said Rear Adm. Ron Boxall, commander, JCSSG. “We will continue the great tradition of projecting power and enhancing US partner relationships around the world.”

The Japan Coast Guard (JCG) will for the first time deploy a vessel to Australia, as part of efforts to strengthen counter-piracy measures in Southeast Asia. The vessel, the 3,300-tonne Souya-class … END_OF_DOCUMENT_TOKEN_TO_BE_REPLACED

MANILA -- The visit of US Chief-of-Navy Operations, Admiral John Richardson, to the Armed Forces of the Philippines (AFP) headquarters in Camp Aguinaldo, Quezon City gave both the Philippines and the … END_OF_DOCUMENT_TOKEN_TO_BE_REPLACED

I was able to attend the 2018 Asian Defense and Security (ADAS) at the World Trade Center (WTC) in Manila recently, and every time the event is held (every two years) it always seem to get bigger and … END_OF_DOCUMENT_TOKEN_TO_BE_REPLACED

MANILA -- The US government reiterated its offer to supply the Philippines with the Lockheed Martin F-16. The offer took place during Department of National Defense (DND) Secretary Delfin … END_OF_DOCUMENT_TOKEN_TO_BE_REPLACED

The kit incorporates, among other systems, an electro-optical imager and a variant of ELTA Systems' EL/M-2022 synthetic aperture radar The 300th Air Intelligence and Security Wing (AISW) of the … END_OF_DOCUMENT_TOKEN_TO_BE_REPLACED

The Philippines will hold joint military exercises with China during the Association of Southeast Asian Nations (Asean)-China military exercise to be held in Zhanjiang, China on October 22 to 29, the … END_OF_DOCUMENT_TOKEN_TO_BE_REPLACED