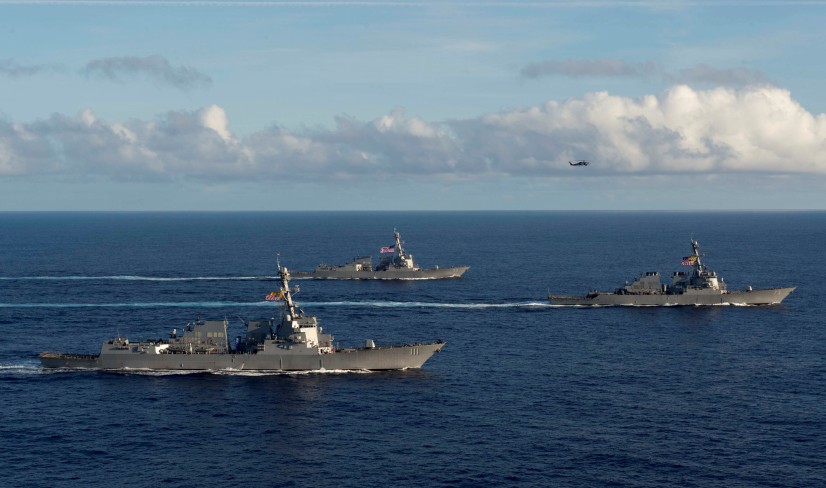 
The Pacific Surface Action Group was deployed from US 3rd Fleet with headquarters in San Diego, California.

“This deployment is a little bit of returning to your roots; our roots of having 3rd Fleet deploying forward through this PAC SAG, throughout your entire cruise,” US Pacific Fleet commander Admiral Scott Swift told crews aboard the USS Momsen during the action group’s port call in Joint Base Pearl Harbor-Hickam April 26.

“The potential options that you can explore as part of this three-ship SAG is very exciting,” said Swift, during his visit to Momsen. “One of the great benefits the Navy brings to the nation is flexibility, and part of that flexibility is going to be demonstrated as soon as you get underway from Hawaii.”

The US Navy said deploying as a PAC SAG allows the three ships to execute a broad range of maritime operations in the US 7th Fleet area of operations while under the operational control of US 3rd Fleet.

US 7th Fleet’s area of operations includes 36 maritime countries and the world’s five largest foreign armed forces, People’s Republic of China, Russia, India, North Korea and Republic of Korea. Moreover, five of the seven US Mutual Defense Treaties are with countries in the area, Republic of the Philippines, Australia and New Zealand, Republic of Korea, Japan, and Thailand.

The US Navy added that turing WWII, the vast majority of 3rd Fleet was forward deployed throughout the Pacific islands in campaigns all the way up to Japan.

The Japan Coast Guard (JCG) will for the first time deploy a vessel to Australia, as part of efforts to strengthen counter-piracy measures in Southeast Asia. The vessel, the 3,300-tonne Souya-class … END_OF_DOCUMENT_TOKEN_TO_BE_REPLACED

MANILA -- The visit of US Chief-of-Navy Operations, Admiral John Richardson, to the Armed Forces of the Philippines (AFP) headquarters in Camp Aguinaldo, Quezon City gave both the Philippines and the … END_OF_DOCUMENT_TOKEN_TO_BE_REPLACED

I was able to attend the 2018 Asian Defense and Security (ADAS) at the World Trade Center (WTC) in Manila recently, and every time the event is held (every two years) it always seem to get bigger and … END_OF_DOCUMENT_TOKEN_TO_BE_REPLACED

MANILA -- The US government reiterated its offer to supply the Philippines with the Lockheed Martin F-16. The offer took place during Department of National Defense (DND) Secretary Delfin … END_OF_DOCUMENT_TOKEN_TO_BE_REPLACED

The kit incorporates, among other systems, an electro-optical imager and a variant of ELTA Systems' EL/M-2022 synthetic aperture radar The 300th Air Intelligence and Security Wing (AISW) of the … END_OF_DOCUMENT_TOKEN_TO_BE_REPLACED

The Philippines will hold joint military exercises with China during the Association of Southeast Asian Nations (Asean)-China military exercise to be held in Zhanjiang, China on October 22 to 29, the … END_OF_DOCUMENT_TOKEN_TO_BE_REPLACED