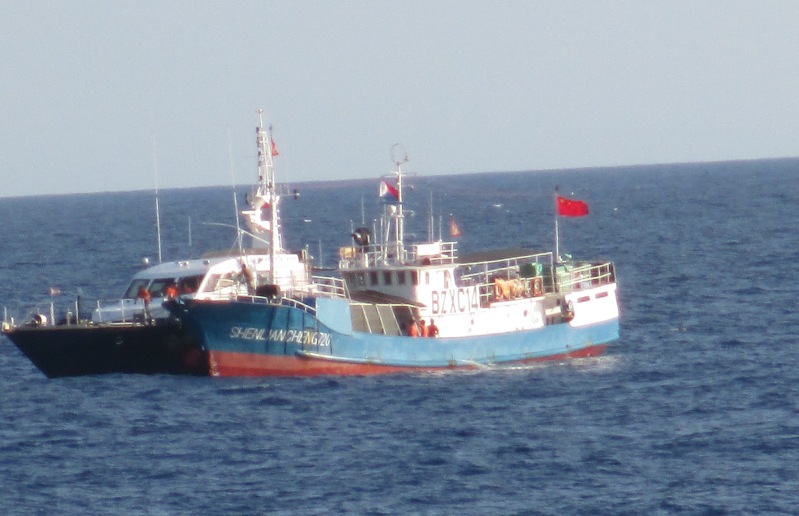 The Philippine Coast Guard (PCG) and the Bureau of Fisheries and Aquatic Resources (BFAR) scored anew in their drive to apprehend foreign fishing vessels fishing in Philippine as they nabbed two Chinese vessels in Balintang Channel Monday.

The two vessels were apprehended by DA-BFAR MCS 3007 and a PCG vessel within waters bounded by Sabtang Island, Batanes in the north, Balintang Island in the west and Calayan Island in the south at around 4:00 p.m.

Specifically, the vessels were apprehended 12 nautical miles southwest of Sabtang Island in Batanes.

The foreign vessels – Shenl Lian Cheng 719 and Shen Lian Cheng 720 – were flying both Chinese and upside down Philippine flags with the red stripe on top, and were crewed by 25 Chinese nationals.

The multi-mission vessel M/V DA-BFAR, which was on its way to Basco, Batanes, came to the scene of the apprehension.

The Chinese said they were just passing through on their way to their fishing grounds outside Philippine waters – showing their empty holds as proof – but were not able to provide the necessary papers for right of passage.

However, Perez said that the mere fact that they were flying the Philippine flag necessitates further investigation. The DA official instructed the apprehending teams to escort the boats to Basco, Batanes for investigation.Basco is the nearest island where proper authorities are headquartered.

Upon arrival at Basco, Perez boarded the seized vessels and tried to explain to the crew that flying the flag of another country is in violation of international law. He also told them that a Chinese embassy official is on its way to Basco.

Poaching carries a fine of between USD 500,000 to USD 1 million and the confiscation of the fishing vessels involved. Crews will be deported to their country of origin.

Meanwhile, Perez immediately sent an urgent message to the Department of Foreign Affairs (DFA) informing them of the nationality of the apprehended fishermen and requested for an interpreter to be available at Basco, Batanes.

The Japan Coast Guard (JCG) will for the first time deploy a vessel to Australia, as part of efforts to strengthen counter-piracy measures in Southeast Asia. The vessel, the 3,300-tonne Souya-class … END_OF_DOCUMENT_TOKEN_TO_BE_REPLACED

MANILA -- The visit of US Chief-of-Navy Operations, Admiral John Richardson, to the Armed Forces of the Philippines (AFP) headquarters in Camp Aguinaldo, Quezon City gave both the Philippines and the … END_OF_DOCUMENT_TOKEN_TO_BE_REPLACED

I was able to attend the 2018 Asian Defense and Security (ADAS) at the World Trade Center (WTC) in Manila recently, and every time the event is held (every two years) it always seem to get bigger and … END_OF_DOCUMENT_TOKEN_TO_BE_REPLACED

MANILA -- The US government reiterated its offer to supply the Philippines with the Lockheed Martin F-16. The offer took place during Department of National Defense (DND) Secretary Delfin … END_OF_DOCUMENT_TOKEN_TO_BE_REPLACED

The kit incorporates, among other systems, an electro-optical imager and a variant of ELTA Systems' EL/M-2022 synthetic aperture radar The 300th Air Intelligence and Security Wing (AISW) of the … END_OF_DOCUMENT_TOKEN_TO_BE_REPLACED

The Philippines will hold joint military exercises with China during the Association of Southeast Asian Nations (Asean)-China military exercise to be held in Zhanjiang, China on October 22 to 29, the … END_OF_DOCUMENT_TOKEN_TO_BE_REPLACED