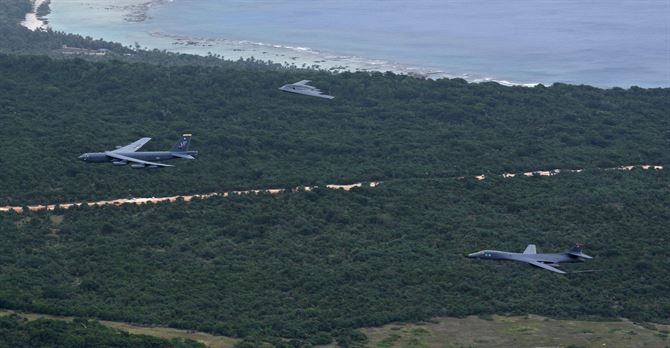 A U.S. Air Force B-52 Stratofortress, B-1 Lancer and B-2 Spirit fly over Guam after launching from Andersen Air Force Base, Guam, for an integrated bomber operation Aug.17, 2016. US Air Force photo

“History was made,” the United States Air Force said after all three of its Global Strike Command’s strategic power projection bombers – the B-52 Stratofortress, B-1B Lancer, and B-2 Spirit – conducted their first ever integrated bomber operation in the Indo-Asia-Pacific region August 17.


According to US Air Force, in the past all the three bombers were independently deployed to US Pacific Command’s area of responsibility, however, this was the first that all three “flew a formation pass over Andersen Air Force Base [in Guam], dispersed and then simultaneously conducted operations in the South China Sea and Northeast Asia.”

US Pacific Air Forces (PACAF) earlier said the B-1 Lancer, which arrived at Andersen Air Force Base in Guam August 6, will replace the B-52 in support of PACOM Continuous Bomber Presence mission. The CBP bomber swap between the B-1 and B-52 is occurring throughout the month of August as the B-1s return to support this mission for the first time since April 2006.

Furthermore, PACAF said in addition to the CBP bomber swap, three B-2s arrived to to conduct a Bomber Assurance and Deterrence deployment. The CBP mission and BAAD deployments are part of a long-standing history of maintaining a consistent bomber presence in the Indo-Asia-Pacific in order to maintain regional stability, and provide assurance to our allies and partners in the region.

The Japan Coast Guard (JCG) will for the first time deploy a vessel to Australia, as part of efforts to strengthen counter-piracy measures in Southeast Asia. The vessel, the 3,300-tonne Souya-class … END_OF_DOCUMENT_TOKEN_TO_BE_REPLACED

MANILA -- The visit of US Chief-of-Navy Operations, Admiral John Richardson, to the Armed Forces of the Philippines (AFP) headquarters in Camp Aguinaldo, Quezon City gave both the Philippines and the … END_OF_DOCUMENT_TOKEN_TO_BE_REPLACED

I was able to attend the 2018 Asian Defense and Security (ADAS) at the World Trade Center (WTC) in Manila recently, and every time the event is held (every two years) it always seem to get bigger and … END_OF_DOCUMENT_TOKEN_TO_BE_REPLACED

MANILA -- The US government reiterated its offer to supply the Philippines with the Lockheed Martin F-16. The offer took place during Department of National Defense (DND) Secretary Delfin … END_OF_DOCUMENT_TOKEN_TO_BE_REPLACED

The kit incorporates, among other systems, an electro-optical imager and a variant of ELTA Systems' EL/M-2022 synthetic aperture radar The 300th Air Intelligence and Security Wing (AISW) of the … END_OF_DOCUMENT_TOKEN_TO_BE_REPLACED

The Philippines will hold joint military exercises with China during the Association of Southeast Asian Nations (Asean)-China military exercise to be held in Zhanjiang, China on October 22 to 29, the … END_OF_DOCUMENT_TOKEN_TO_BE_REPLACED