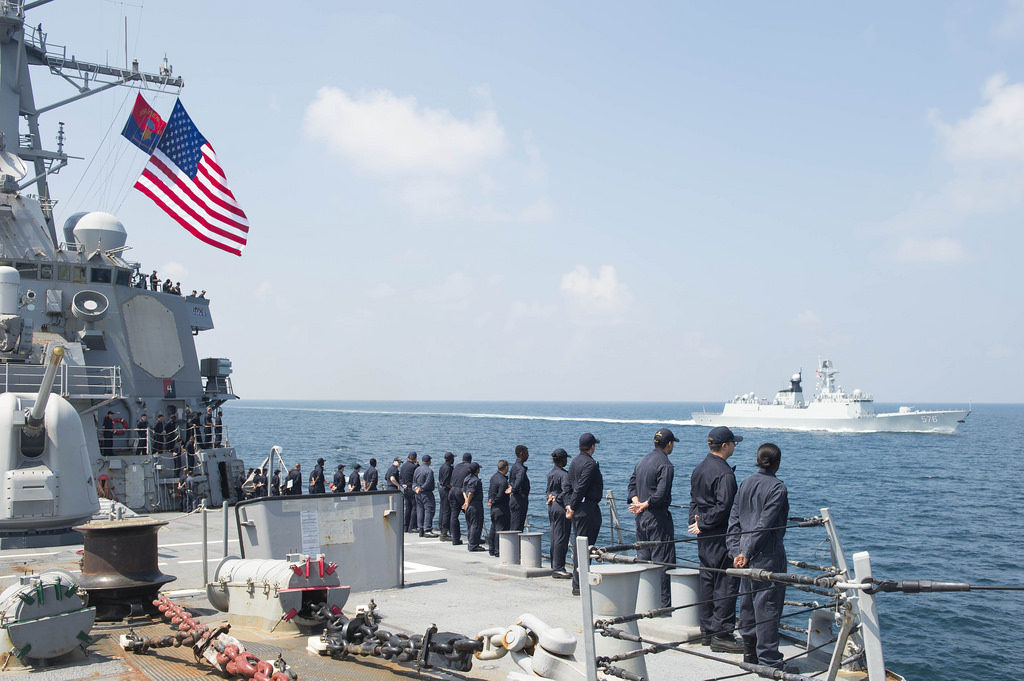 Sailors aboard the guided-missile destroyer USS Benfold (DDG 65) man the rails before the ship breaks away from the People’s Liberation Army (Navy) Jiangkai II class frigate Daqing (FFG 576) during a Code for Unplanned Encounters at Sea (CUES) exercise. US Navy photo

US Navy said Benfold and PLA Navy’s Jiangkai II class frigate Daqing (FFG 576) practiced tactical signals to maneuver into lead and trail positions as well as CUES to facilitate clear and professional communication between the ships.

“This engagement helped to strengthen our continued use of CUES in an effort to reinforce international norms when operating in close proximity to each other,” said USS Benfold operations officer aboard Lieutenant Christopher Ragsdale.

CUES is an agreement reached at the 2014 Western Pacific Naval Symposium to reduce the chance of an incident at sea between the countries in the agreement, and – in the event that one occurred – to prevent it from escalating.

The final event in the engagement between two navies practiced search and rescue where both the Daqing and Benfold searched for, and rescued, simulated victims dropped by a Chinese Navy support ship.

USS Benfold is a US Navy destroyer forward deployed to Yokosuka, Japan. She is currently underway in support of security and stability in the Indo-Asian Pacific.

The Japan Coast Guard (JCG) will for the first time deploy a vessel to Australia, as part of efforts to strengthen counter-piracy measures in Southeast Asia. The vessel, the 3,300-tonne Souya-class … END_OF_DOCUMENT_TOKEN_TO_BE_REPLACED

MANILA -- The visit of US Chief-of-Navy Operations, Admiral John Richardson, to the Armed Forces of the Philippines (AFP) headquarters in Camp Aguinaldo, Quezon City gave both the Philippines and the … END_OF_DOCUMENT_TOKEN_TO_BE_REPLACED

I was able to attend the 2018 Asian Defense and Security (ADAS) at the World Trade Center (WTC) in Manila recently, and every time the event is held (every two years) it always seem to get bigger and … END_OF_DOCUMENT_TOKEN_TO_BE_REPLACED

MANILA -- The US government reiterated its offer to supply the Philippines with the Lockheed Martin F-16. The offer took place during Department of National Defense (DND) Secretary Delfin … END_OF_DOCUMENT_TOKEN_TO_BE_REPLACED

The kit incorporates, among other systems, an electro-optical imager and a variant of ELTA Systems' EL/M-2022 synthetic aperture radar The 300th Air Intelligence and Security Wing (AISW) of the … END_OF_DOCUMENT_TOKEN_TO_BE_REPLACED

The Philippines will hold joint military exercises with China during the Association of Southeast Asian Nations (Asean)-China military exercise to be held in Zhanjiang, China on October 22 to 29, the … END_OF_DOCUMENT_TOKEN_TO_BE_REPLACED