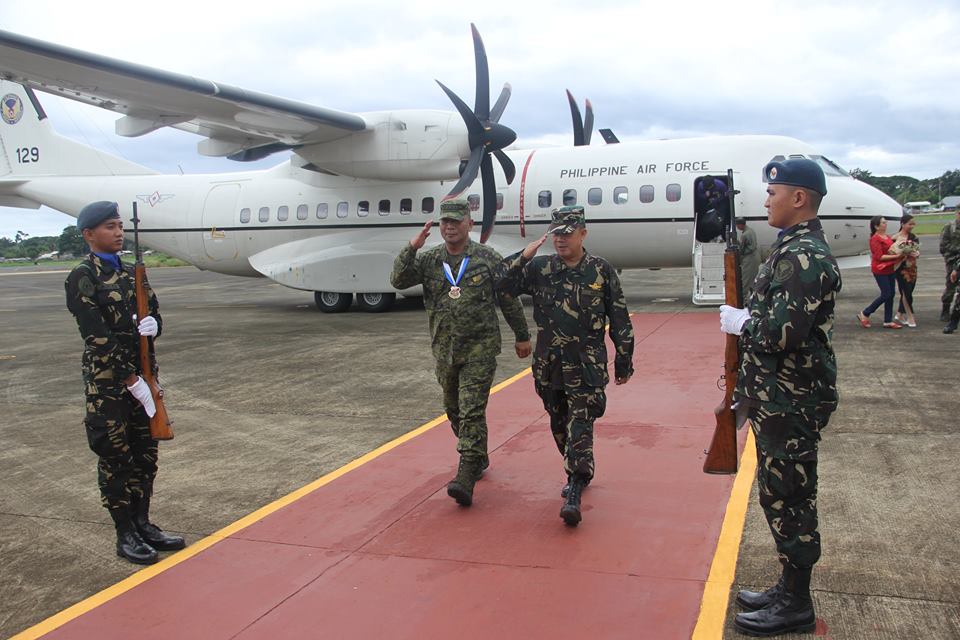 Armed Forces of the Philippines (AFP) Chief-of-Staff General Ricardo R. Visaya visited the Palawan-based Western Command (WESCOM) Wednesday, October 5. WESCOM said the visit aims to boost the morale and welfare of the troops and to lay-down guidance for the accomplishment of the mission of the government and AFP as a whole.

He was rendered with foyer Honors which was attended by the Commanders of the Units, officers, enlisted personnel and civilian employees of the Command. It was then followed by an executive session with WESCOM Commander Vice Admiral Ronald Joseph S. Mercado.

During the “Talk to Men’, he delivered the guidance of Commander-in-Chief President Rodrigo R. Duterte which are: the crush of Abu Sayyaf which was the reason for realignment of some of the forces and military assets in Western Mindanao Command (WESMINCOM); to assist the PNP and PDEA in their anti-illegal drug campaign; and the government is supporting peace negotiation with the communist leaders.

“In support to the anti-illegal drug campaign of the government, the AFP constantly undergo random drug testing to different commands and units of the Armed Forces to determine those military personnel who are using illegal drugs,” General Visaya said. “Compared to other government agencies, few were only discharged in their service due to the positive result in drug test.”

The Japan Coast Guard (JCG) will for the first time deploy a vessel to Australia, as part of efforts to strengthen counter-piracy measures in Southeast Asia. The vessel, the 3,300-tonne Souya-class … END_OF_DOCUMENT_TOKEN_TO_BE_REPLACED

MANILA -- The visit of US Chief-of-Navy Operations, Admiral John Richardson, to the Armed Forces of the Philippines (AFP) headquarters in Camp Aguinaldo, Quezon City gave both the Philippines and the … END_OF_DOCUMENT_TOKEN_TO_BE_REPLACED

I was able to attend the 2018 Asian Defense and Security (ADAS) at the World Trade Center (WTC) in Manila recently, and every time the event is held (every two years) it always seem to get bigger and … END_OF_DOCUMENT_TOKEN_TO_BE_REPLACED

MANILA -- The US government reiterated its offer to supply the Philippines with the Lockheed Martin F-16. The offer took place during Department of National Defense (DND) Secretary Delfin … END_OF_DOCUMENT_TOKEN_TO_BE_REPLACED

The kit incorporates, among other systems, an electro-optical imager and a variant of ELTA Systems' EL/M-2022 synthetic aperture radar The 300th Air Intelligence and Security Wing (AISW) of the … END_OF_DOCUMENT_TOKEN_TO_BE_REPLACED

The Philippines will hold joint military exercises with China during the Association of Southeast Asian Nations (Asean)-China military exercise to be held in Zhanjiang, China on October 22 to 29, the … END_OF_DOCUMENT_TOKEN_TO_BE_REPLACED