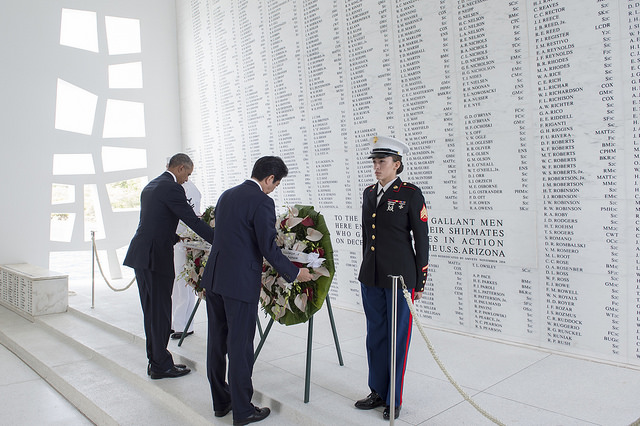 “We must never repeat the horrors of war again, this is the solemn vow the people of Japan have taken,” Japan Prime Minister Shinzo Abe said on Kilo Pier at Joint Base Pearl Harbor-Hickam December 27.

Japanese war survivors on Wednesday welcomed Prime Minister Shinzo Abe’s visit to Pearl Harbor to offer condolences for those who died in the 1941 Japanese surprise attack there, although some questioned why the premier did not apologize or mention the state’s responsibility for pursuing war.

“Pearl Harbor had been a symbol of the two countries’ hatred, but the visit changed it to that of reconciliation and peace,” said Shigeaki Mori, 79, a survivor of the atomic bombing of Hiroshima who researched the fate of 12 American soldiers killed in the US attack.

Mori was hugged by US President Barack Obama during his historic visit to Hiroshima in August, ahead of Abe’s reciprocal trip to the site in Hawaii on Tuesday local time. with PNA/Kyodo

The Japan Coast Guard (JCG) will for the first time deploy a vessel to Australia, as part of efforts to strengthen counter-piracy measures in Southeast Asia. The vessel, the 3,300-tonne Souya-class … END_OF_DOCUMENT_TOKEN_TO_BE_REPLACED

MANILA -- The visit of US Chief-of-Navy Operations, Admiral John Richardson, to the Armed Forces of the Philippines (AFP) headquarters in Camp Aguinaldo, Quezon City gave both the Philippines and the … END_OF_DOCUMENT_TOKEN_TO_BE_REPLACED

I was able to attend the 2018 Asian Defense and Security (ADAS) at the World Trade Center (WTC) in Manila recently, and every time the event is held (every two years) it always seem to get bigger and … END_OF_DOCUMENT_TOKEN_TO_BE_REPLACED

MANILA -- The US government reiterated its offer to supply the Philippines with the Lockheed Martin F-16. The offer took place during Department of National Defense (DND) Secretary Delfin … END_OF_DOCUMENT_TOKEN_TO_BE_REPLACED

The kit incorporates, among other systems, an electro-optical imager and a variant of ELTA Systems' EL/M-2022 synthetic aperture radar The 300th Air Intelligence and Security Wing (AISW) of the … END_OF_DOCUMENT_TOKEN_TO_BE_REPLACED

The Philippines will hold joint military exercises with China during the Association of Southeast Asian Nations (Asean)-China military exercise to be held in Zhanjiang, China on October 22 to 29, the … END_OF_DOCUMENT_TOKEN_TO_BE_REPLACED