You are here: Home / Nation / What’s with the shoes?: Pair made of pineapple fiber 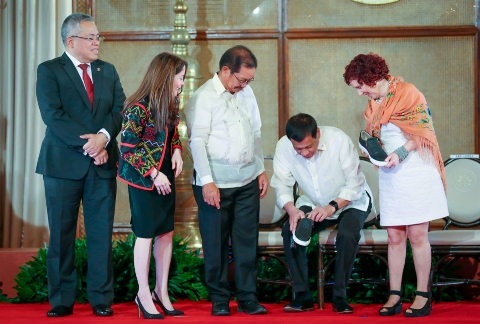 President Duterte sported the pair in some engagements during that day at Malacañang Palace. He was seen wearing the shoes during a meeting with Philippine General Hospital (PGH) Director Dr. Gerardo Legaspi when he handed over check worth P100-million for medical needs of poor patients at PGH.

The pair of shoes was given to him during the turnover ceremony of P8.5-million worth of processing and post-harvest facilities to five farmers cooperatives for the commercial production of pineapple fibers at the Malacañang Palace.

“With this development, hundreds of tons of Pineapple Leaves which were left in the field to rot in the past, can now be the source of income for poor farmers to be able to send their children to school,” Piñol informed President Duterte during the ceremony.