The Philippine National Police (PNP) in Eastern Visayas will receive 45 brand new Toyota Prius hybrid cars from the Department of Energy (DOE) on Wednesday. The cars were donated by the Japanese government to areas affected by super typhoon “Yolanda”.

PNP Regional Director Chief Supt. Elmer Beltejar said the ceremonial turn-over would be attended by the Japanese Ambassador to the Philippines Kazuhide Ishikawa and Police Attaché of Japan and key officials from the DOE. 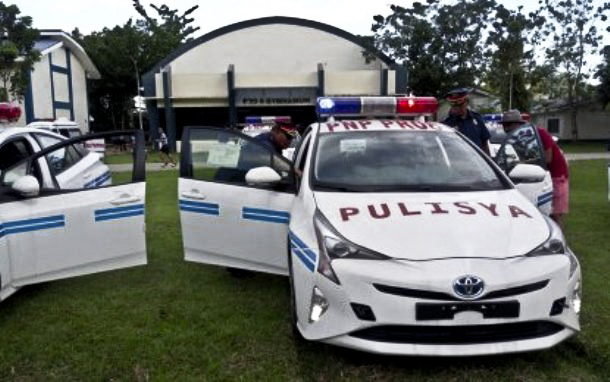 The turn-over was supposed to take place last July, but signatories of the donation were not available, prompting the regional police to postpone the activity.

The hybrid patrol cars will be distributed to police offices in Eastern Samar, Samar, Leyte and Tacloban City.

“The DOE will also provide PHP200,000 annual budget for the next five years for maintenance of the car,” Beltejar told PNA.

Before the turn-over, three policemen for each recipient police station were trained on the handling, driving and maintenance of the cars.

The hybrid cars will help police personnel in patrolling their area to maintain peace and order and respond to emergency situations.

Earlier, the DOE also turned-over eight hybrid cars to national government agencies in Eastern Visayas such as the Philippine Information Agency, Department of Trade and Industry and Office of Civil Defense.

Part of the agreement for the donation of hybrid cars is for the recipients to help DOE in the research, performance testing and promotion of alternative fuel vehicles for local adaptation.

The hybrid cars are powered using electricity and fuel.

The Japanese government provided to the Philippine government 500-million-yen (about PHP250 million) grant for the procurement and delivery of the hybrid vehicles under the Japan Non-Project Grant Aid.