You are here: Home / World / US Army getting new Maneuver Support Vessels 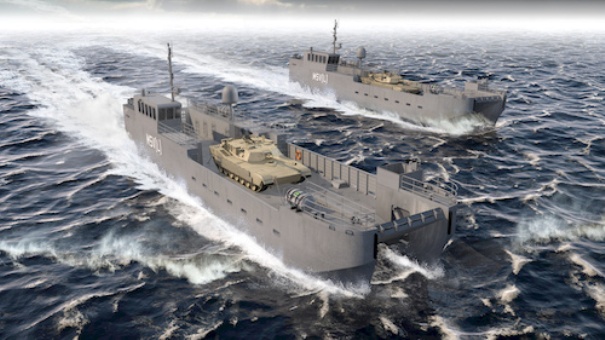 United States Department of Defense disclosed in a release on September 28 that Vigor Works was awarded by the US Army Contracting Command to build US Army’s Maneuver Support Vessel (Light) MSV(L).

The MSV(L) will replace US Army’s Landing Craft Mechanized 8 (LCM-8 or “Mike Boat”) that had been in service since 1959.

“The contract calls for one prototype vessel, four vessels under low rate production, and up to thirty two additional vessels for use by Army Mariners in even the most difficult environments,” Vigor Ballard general manager Tim Kolb said. Vigor Ballard spearheaded the proposal process.

Vigor said the design was developed in partnership with BMT following a detailed study of the Army’s unique needs and the available design options to fulfill those needs.

It added that the MSV(L) dramatically improves the capabilities of the current LCM-8 and provides the optimal combination of performance, operational flexibility and life-cycle cost while maintaining the reliability and versatility of the Army’s current craft.

The Japan Coast Guard (JCG) will for the first time deploy a vessel to Australia, as part of efforts to strengthen counter-piracy measures in Southeast Asia. The vessel, the 3,300-tonne Souya-class … END_OF_DOCUMENT_TOKEN_TO_BE_REPLACED

MANILA -- The visit of US Chief-of-Navy Operations, Admiral John Richardson, to the Armed Forces of the Philippines (AFP) headquarters in Camp Aguinaldo, Quezon City gave both the Philippines and the … END_OF_DOCUMENT_TOKEN_TO_BE_REPLACED

I was able to attend the 2018 Asian Defense and Security (ADAS) at the World Trade Center (WTC) in Manila recently, and every time the event is held (every two years) it always seem to get bigger and … END_OF_DOCUMENT_TOKEN_TO_BE_REPLACED

MANILA -- The US government reiterated its offer to supply the Philippines with the Lockheed Martin F-16. The offer took place during Department of National Defense (DND) Secretary Delfin … END_OF_DOCUMENT_TOKEN_TO_BE_REPLACED

The kit incorporates, among other systems, an electro-optical imager and a variant of ELTA Systems' EL/M-2022 synthetic aperture radar The 300th Air Intelligence and Security Wing (AISW) of the … END_OF_DOCUMENT_TOKEN_TO_BE_REPLACED

The Philippines will hold joint military exercises with China during the Association of Southeast Asian Nations (Asean)-China military exercise to be held in Zhanjiang, China on October 22 to 29, the … END_OF_DOCUMENT_TOKEN_TO_BE_REPLACED