You are here: Home / World / US fires HIMARS from the flight deck of warship

HIMARS is a weapons system consists of five-ton chassis vehicle M142 which carries either a launcher pod of six rockets or one MGM-140 Army Tactical Missile System (ATACMS). 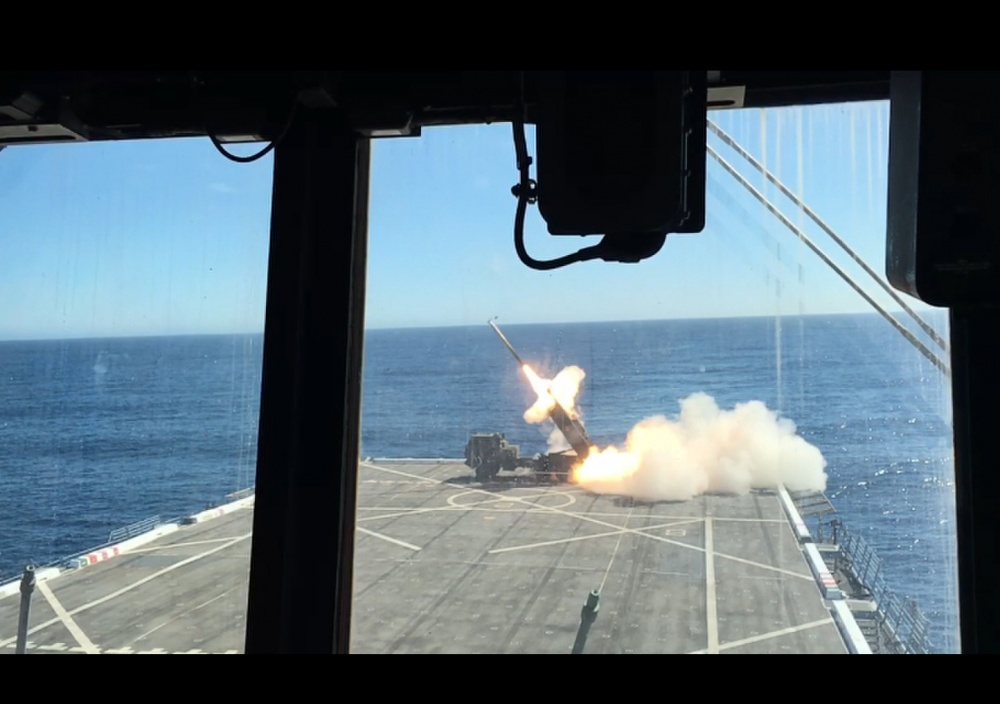 HIMARS enables the US Marines to engage targets within minutes after firing and features an advanced targeting system that strikes with an extremely high accuracy rate, the US Navy said. It can also cover greater range than traditional artillery.

“The first training objective was demonstrating this capability, and second, we wanted to have good effects on the target. We achieved both objectives. We destroyed the target at 70 kilometers while at sea,” said Major Adam Ropelewski, I Marine Expeditionary Force (MEF), lead planner for sea-based expeditionary fires.

“We shot a rocket off Anchorage to validate that we, as HIMARS operators, can shoot off an LPD and successfully hit the target,” said Lance Cpl. Ryan Irving, a HIMARS operator assigned to 5th Battalion, 11th Marines.

The Japan Coast Guard (JCG) will for the first time deploy a vessel to Australia, as part of efforts to strengthen counter-piracy measures in Southeast Asia. The vessel, the 3,300-tonne Souya-class … END_OF_DOCUMENT_TOKEN_TO_BE_REPLACED

MANILA -- The visit of US Chief-of-Navy Operations, Admiral John Richardson, to the Armed Forces of the Philippines (AFP) headquarters in Camp Aguinaldo, Quezon City gave both the Philippines and the … END_OF_DOCUMENT_TOKEN_TO_BE_REPLACED

I was able to attend the 2018 Asian Defense and Security (ADAS) at the World Trade Center (WTC) in Manila recently, and every time the event is held (every two years) it always seem to get bigger and … END_OF_DOCUMENT_TOKEN_TO_BE_REPLACED

MANILA -- The US government reiterated its offer to supply the Philippines with the Lockheed Martin F-16. The offer took place during Department of National Defense (DND) Secretary Delfin … END_OF_DOCUMENT_TOKEN_TO_BE_REPLACED

The kit incorporates, among other systems, an electro-optical imager and a variant of ELTA Systems' EL/M-2022 synthetic aperture radar The 300th Air Intelligence and Security Wing (AISW) of the … END_OF_DOCUMENT_TOKEN_TO_BE_REPLACED

The Philippines will hold joint military exercises with China during the Association of Southeast Asian Nations (Asean)-China military exercise to be held in Zhanjiang, China on October 22 to 29, the … END_OF_DOCUMENT_TOKEN_TO_BE_REPLACED