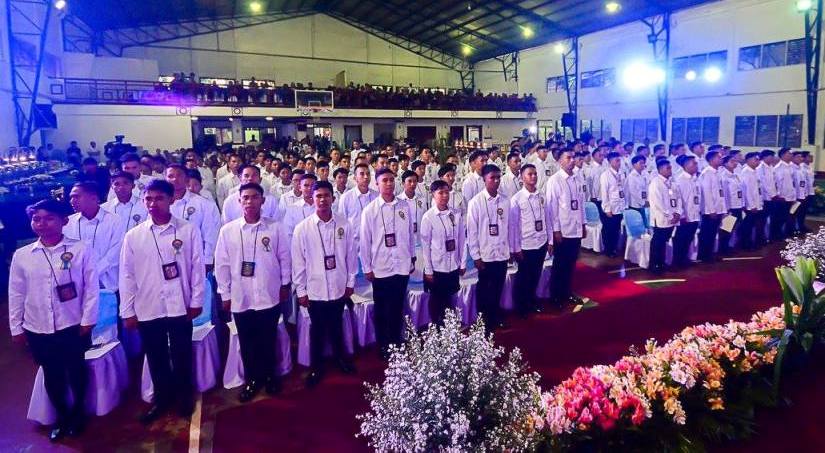 According to PDEA Director General Aaron Aquino who grace the Commencement Exercises as Guest of Honor and Speaker, 110 of 126 will be deployed to monitor the country’s 13 key seaports and 1,200 private seaports nationwide, while 16 will be assigned to PDEA’s Financial Investigation Unit to enhance the agency’s capability to follow drug money trail and investigate possible money laundering activities.

Aquino said the 110 agents will be involved in close scrutiny of cargoes entering the country and will also sit beside X-ray technicians of the Bureau of Customs (BOC) to help in the detection of smuggled illegal drugs.

The deployment of the agents is one of the provisions of the Memorandum of Agreement (MOA) to be entered into by PDEA and Maritime Industry Authority (MARINA) and Philippine Ports Authority (PPA). The proposed MOA was discussed during the visit of Macario Almario III, MARINA Administrator, to PDEA Director General Aquino.

He said they agreed to deputize PDEA agents to inspect all maritime vessels in the country’s 1,200 private seaports.

“This is a big boost to our intensified anti-drug campaign, particularly in our seaports where bulk of illegal drugs are smuggled. In addition, they will be our new eyes and ears against drugs syndicates who take advantage of the country’s porous shoreline which serves as entry and exit points of illegal drugs,” Aquino said. with PNA

The Japan Coast Guard (JCG) will for the first time deploy a vessel to Australia, as part of efforts to strengthen counter-piracy measures in Southeast Asia. The vessel, the 3,300-tonne Souya-class … END_OF_DOCUMENT_TOKEN_TO_BE_REPLACED

MANILA -- The visit of US Chief-of-Navy Operations, Admiral John Richardson, to the Armed Forces of the Philippines (AFP) headquarters in Camp Aguinaldo, Quezon City gave both the Philippines and the … END_OF_DOCUMENT_TOKEN_TO_BE_REPLACED

I was able to attend the 2018 Asian Defense and Security (ADAS) at the World Trade Center (WTC) in Manila recently, and every time the event is held (every two years) it always seem to get bigger and … END_OF_DOCUMENT_TOKEN_TO_BE_REPLACED

MANILA -- The US government reiterated its offer to supply the Philippines with the Lockheed Martin F-16. The offer took place during Department of National Defense (DND) Secretary Delfin … END_OF_DOCUMENT_TOKEN_TO_BE_REPLACED

The kit incorporates, among other systems, an electro-optical imager and a variant of ELTA Systems' EL/M-2022 synthetic aperture radar The 300th Air Intelligence and Security Wing (AISW) of the … END_OF_DOCUMENT_TOKEN_TO_BE_REPLACED

The Philippines will hold joint military exercises with China during the Association of Southeast Asian Nations (Asean)-China military exercise to be held in Zhanjiang, China on October 22 to 29, the … END_OF_DOCUMENT_TOKEN_TO_BE_REPLACED