“The former terrorists said that they were already tired of fighting against the government forces coupled with the experience of starvation caused by the dwindling support from their masses hence they decided to return to the folds of the law,” 10ID said. 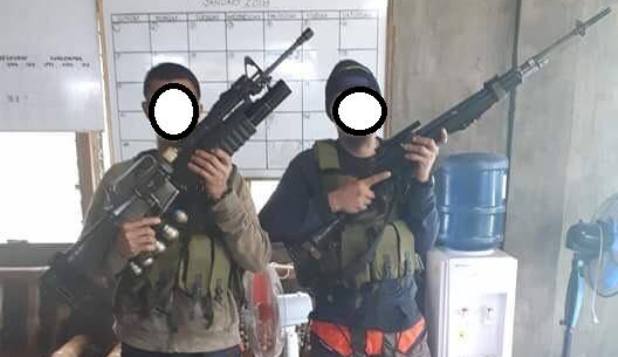 10ID added that they surrendered unarmed but later revealed that they have hidden high powered firearms composed of one M14 Rifle and one M16 Rifle attached with M203 Grenade Launcher in Brgy Sibulan, Toril District, Davao City.

“This is an excellent manifestation that our efforts on winning against communist terrorists through focus military operations and Community Support Program (CSP) activities are effective. Because of this, we are expecting more surrenderees in the coming days. Thus, we are reiterating our call on other NPA members to lay down their arms, surrender and avail the Comprehensive Local Integration Program (CLIP),” 73IB commander Lieutenant Colonel Marion Angcao said.

“The significant increase of former NPA terrorists returning to the folds of the law is also an evidence of our effective collaboration with the Local Government Unit and Local Officials of Province of Davao del Sur,” Lieutenant Colonel Angcao added.

The Japan Coast Guard (JCG) will for the first time deploy a vessel to Australia, as part of efforts to strengthen counter-piracy measures in Southeast Asia. The vessel, the 3,300-tonne Souya-class … END_OF_DOCUMENT_TOKEN_TO_BE_REPLACED

MANILA -- The visit of US Chief-of-Navy Operations, Admiral John Richardson, to the Armed Forces of the Philippines (AFP) headquarters in Camp Aguinaldo, Quezon City gave both the Philippines and the … END_OF_DOCUMENT_TOKEN_TO_BE_REPLACED

I was able to attend the 2018 Asian Defense and Security (ADAS) at the World Trade Center (WTC) in Manila recently, and every time the event is held (every two years) it always seem to get bigger and … END_OF_DOCUMENT_TOKEN_TO_BE_REPLACED

MANILA -- The US government reiterated its offer to supply the Philippines with the Lockheed Martin F-16. The offer took place during Department of National Defense (DND) Secretary Delfin … END_OF_DOCUMENT_TOKEN_TO_BE_REPLACED

The kit incorporates, among other systems, an electro-optical imager and a variant of ELTA Systems' EL/M-2022 synthetic aperture radar The 300th Air Intelligence and Security Wing (AISW) of the … END_OF_DOCUMENT_TOKEN_TO_BE_REPLACED

The Philippines will hold joint military exercises with China during the Association of Southeast Asian Nations (Asean)-China military exercise to be held in Zhanjiang, China on October 22 to 29, the … END_OF_DOCUMENT_TOKEN_TO_BE_REPLACED