The jeepneys cover the Tacloban-Palanog route intended to improve accessibility to resettlement sites occupied by thousands of super typhoon Yolanda.

“This is the program that we cannot give up on. Many administrations have tried but never got the first base because this is a large-scale transformation. We are not just making repairs, we are overhauling the fleet, the system, the industry and the institution,” Assistant Secretary Mark Richmund de Leon said.

The solar jeepneys, designed to replace the aging combustion engine fleet, have been operating in the city since mid-December.

Each unit can carry 20 passengers with free WiFi onboard, overhead electric fan per passenger, and USB power port per passenger to charge their devices.

It has a capacity to travel approximately 100 kilometers on a full battery charge and adding another 10-15km from the solar production during daylight hours.

“Dignified commuting experience is what we want to achieve. We want our drivers to be proud of their job and commuters to be happy and safe in their riding experience,” said de Leon during the launch at the Rizal Park here.

The e-jeepney will address the serious problem of air pollution in urban areas largely caused by dilapidated jeepneys, said the DOTr official.

“The PUV Modernization Program is long overdue. Past administrations have long wanted to modernize transportation, but every time people wave flags saying that the program is anti-poor, we take a step back. Hence, the present sorry state of our road transportation. This has to stop,” de Leon said. 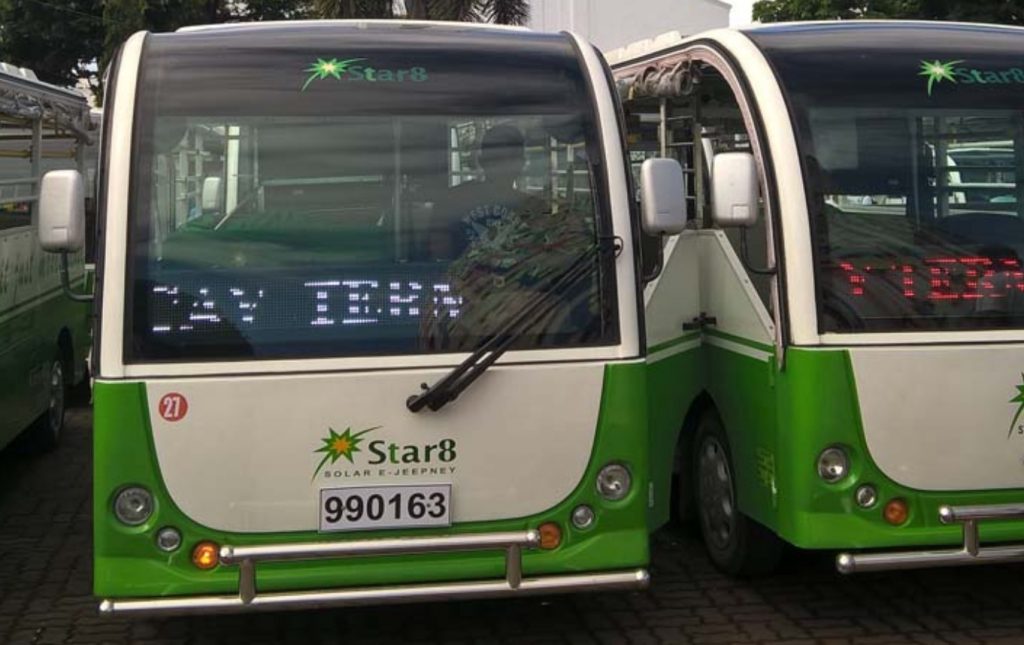 The Development Bank of the Philippines earlier announced a PHP1.5 billion loan to finance the acquisition of new PUVs to qualified prospective borrowers.

Land Transportation Franchising and Regulatory Board Chairman Martin Delgra III said the program will address the public transportation system concern in the city’s relocation sites where thousands of people have to wait for hours to get to the commercial district from their new homes.

“After we heard the mobility concerns of relocated families, we thought of piloting the environment-friendly public transportation system in this city,” Delgra said.

More than 8,000 families have been moved from danger zones to relocation sites in the northern part of the city, creating huge demand for public transportation. (PNA)

Here in the Philippines, there are lots of events that can – and do – have an effect on the economy. From the recent debates over the local labour market to natural disasters such as Typhoon Haiyan, … END_OF_DOCUMENT_TOKEN_TO_BE_REPLACED

Technology is everywhere these days, reaching into every aspect of our lives and empowering us in ways we never would have imagined in the past. With that new power comes new dangers however, and we … END_OF_DOCUMENT_TOKEN_TO_BE_REPLACED

The free tuition law will cover the tuition and fees of students enrolled in 112 SUCs, 78 LUCs, and all duly registered technical-vocation education and training programs starting this school … END_OF_DOCUMENT_TOKEN_TO_BE_REPLACED

The U.S Department of Defense is in talks with their Philippine counterpart on the acquisition of 10 AH-1W Super Cobra attack helicopters, with 2 frames possibly funded by Foreign Military Sales (FMS) … END_OF_DOCUMENT_TOKEN_TO_BE_REPLACED

The Philippine Air Force’s technical working group (TWG) has identified Sikorsky UH60 (Blackhawk) as the combat utility helicopter that would replace the mothballed Bell 412 EPIs, while the selection … END_OF_DOCUMENT_TOKEN_TO_BE_REPLACED

The United States Navy on Monday said that it is willing to give some equipment needed for the Navy modernization training of the Philippine Navy's personnel. "We can contribute, certainly from … END_OF_DOCUMENT_TOKEN_TO_BE_REPLACED