You are here: Home / Nation / Hanjin Shipyard Unveils One of the World’s Biggest Vessels

Hanjin Shipyard Unveils One of the World’s Biggest Vessels

While the news is focused on the completion of one of the world’s largest ship by Hanjin Heavy Industries & Construction Philippines Inc. (HHIC Phil), it also mentioned the inclusion of coast guard and naval vessels into its portfolio.

This means HHIC Philippines can now join and compete on ship projects for the Philippine Navy and Philippine Coast Guard, and benefit from a better pricing and employing Filipino builders as the ships would be built in local shipyards. 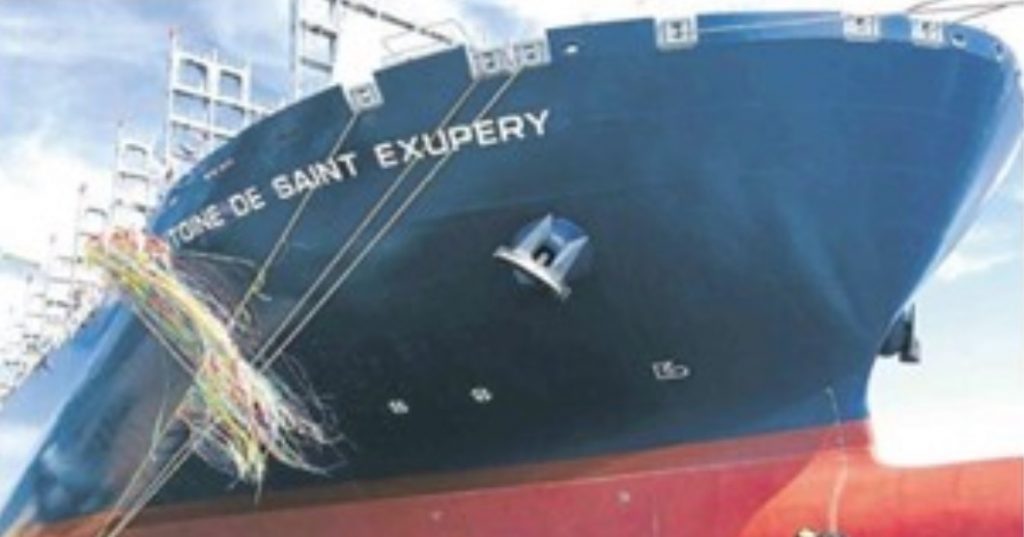 President Duterte described the ship as a “gigantic and technologically superior vessel,” in a speech read for him by Subic Bay Metropolitan Authority (SBMA) Chair and Administrator Wilma Eisma during the launching ceremony here.

“So I expect HHIC-Phil to remain a pillar and partner in the growth of the Philippine maritime industry, especially now that our country is experiencing robust economic growth,” said Mr. Duterte, who is in India to attend a regional summit with leaders of the Association of Southeast Asian Nations.

Mr. Duterte also called on Hanjin officials to protect the welfare of its workers. “For how else could you have expected the many vessels were it not for their craftsmanship and hard work? How else can you make good your order … if it were not for these Filipino workers?” he said in the speech.

Gordon described the vessel as a “product of Korea and Filipino craftsmanship.”

Arroyo said Hanjin was among the companies that invested billions of dollars in the country during her term as President. She said Hanjin would “weather the next two years,” despite the challenges being faced by the shipbuilding industry.

The vessel is considered as one of the biggest commercial ships in the world today as it measures 400 meters in length overall, 59 meters in width and 33 meters in depth. Highlighting its game changing role in the international shipping market, the mammoth container vessel could transport up to 20,950 units of 40 foot shipping container, which, when lined up, would reach 12.5 kilometers long. Its deck is as big as four football fields.

The newly-built vessel is the first of three 20,600 TEU class Ultra Large Container ships (ULCS) to be delivered by HHIC-Phil Inc. to French shipping magnate CMA CGM following the signing of the newbuilding contract in April 2015. Indeed, the daunting task of building such a huge vessel brought out the best in HHIC-Phil Inc. in terms of technology and innovation. Under the technical supervision of classification society Bureau Veritas, HHIC-Phil Inc. successfully carried out the construction of the vessel and the ship was launched in August 2017, and it successfully underwent sea trials in December 2017 to the full satisfaction of its proud owner.

According to HHIC-Phil Inc., beaming with pride and honor, “This newly-built 20,600 TEU  vessel proves, among others, the strength and capability of our Subic shipyard to manufacture in a timely manner mega ships of much higher quality tonnage that are now shaping the shipping landscape around the world”.
Recognizing the crucial role of the Philippine labor in the HHIC-Phil’s shipbuilding operations, the Company added “The dedication of our highly skilled Filipino workers towards excellence is the driving force behind whatever positive things we have achieved amid the global economic challenges”.
Having directly poured USD2.3 Billion worth of investments in the country, HHIC-Phil Inc. shares the vision of every Filipino of a much better Philippines. Since its maiden ship delivery in 2009, HHIC-Phil Inc. has exported a total of 113 ocean-going merchant ships worth more than USD6 Billion, catapulting the Philippines among the top five shipbuilding countries in the world.

“Working hand in hand with its business partners, HHIC-Phil Inc. will continue to raise the bar of excellence by upgrading our capacity to meet, and always be cognizant of, the ever growing demands of the industry stakeholders for cost efficient, environment-friendly and technologically advanced vessels”, the Company further stated.

HHIC-Phil Inc. is currently building a number of commercial ships of high grade specifications such as liquefied petroleum gas carriers and oil crude tankers besides ULCS. These newbuilding projects are expected to be completed and delivered the end of 2019.

Meanwhile, the HHIC-Phil Inc. has recently expanded its business activity, with the inclusion of coast guard and combat vessels in its product portfolio. With the anticipated approval by the Department of Defense, this latest endeavor of HHIC-Phil Inc. is expected to help boost the country’s maritime and defense capability in the future.

In line with its social corporate initiatives, HHIC-Phil’s Subic shipyard has been creating tens of thousands of job opportunities for the local residents over the years.

“I’m hoping that Hanjin workers would continue to have good job opportunities. We all have to work together to keep the shipbuilding industry afloat,” she said.

The container vessel could transport up to 20,950 units of 40-foot shipping container, which, when lined up, would reach 12.5 kilometers long. Its deck is equivalent to four football fields.

The vessel is the first of three 20,600 TEU class ultra large container ships to be delivered by HHIC-Phil Inc. to French shipping magnate CMA CGM following the signing of the new building contract in April 2015.

Here in the Philippines, there are lots of events that can – and do – have an effect on the economy. From the recent debates over the local labour market to natural disasters such as Typhoon Haiyan, … END_OF_DOCUMENT_TOKEN_TO_BE_REPLACED

Technology is everywhere these days, reaching into every aspect of our lives and empowering us in ways we never would have imagined in the past. With that new power comes new dangers however, and we … END_OF_DOCUMENT_TOKEN_TO_BE_REPLACED

The free tuition law will cover the tuition and fees of students enrolled in 112 SUCs, 78 LUCs, and all duly registered technical-vocation education and training programs starting this school … END_OF_DOCUMENT_TOKEN_TO_BE_REPLACED

The U.S Department of Defense is in talks with their Philippine counterpart on the acquisition of 10 AH-1W Super Cobra attack helicopters, with 2 frames possibly funded by Foreign Military Sales (FMS) … END_OF_DOCUMENT_TOKEN_TO_BE_REPLACED

The Philippine Air Force’s technical working group (TWG) has identified Sikorsky UH60 (Blackhawk) as the combat utility helicopter that would replace the mothballed Bell 412 EPIs, while the selection … END_OF_DOCUMENT_TOKEN_TO_BE_REPLACED

The United States Navy on Monday said that it is willing to give some equipment needed for the Navy modernization training of the Philippine Navy's personnel. "We can contribute, certainly from … END_OF_DOCUMENT_TOKEN_TO_BE_REPLACED