The 220th Airlift Wing has been going the extra mile to cascade the concept and promote personnel awareness on the Philippine Air Force Flight Plan Strategy Map.

Earlier today, it unveiled and displayed the largest version of the strategy map at the 220th Airlift Hangar measuring 19 feet wide and 11 feet high – the largest strategy map tarpaulin so far of the PAF.

The installation of the tarpaulin at the hangar – where formations and major functions are usually held – conforms to the instruction of its Wing Commander, BGen Stephen P Parreño AFP, in order to promote personnel awareness on the new strategy map. 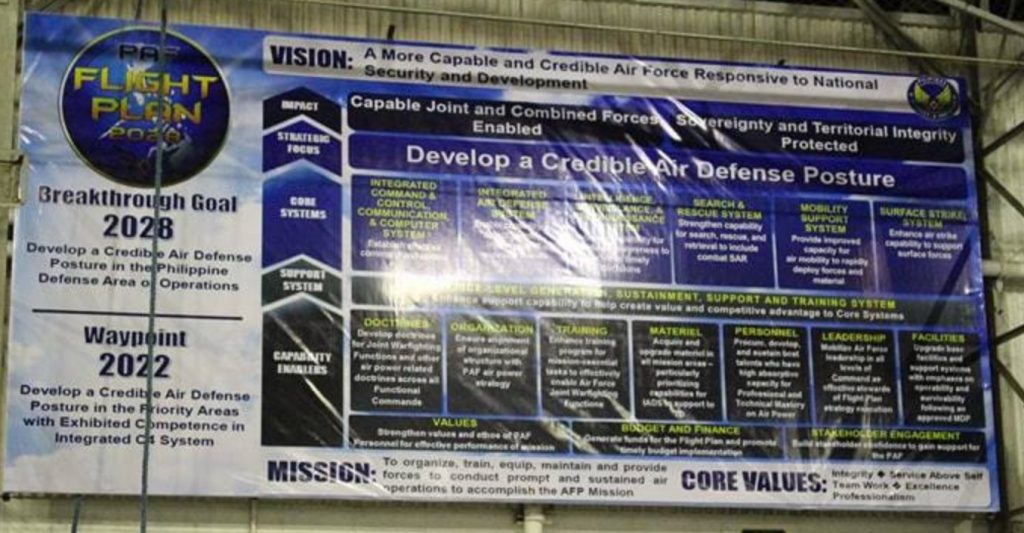 Another tarpaulin of the same design but smaller in size, about 8 feet wide and 5 feet high, was posted near the main entrance of the unit. Apart from that, the unit also created its own strategy map design which was distributed to every office for display. In addition, personnel was also required to set the strategy map design as wallpaper of their desktop computers.

All of these are part of the Wing’s concrete initiatives to demonstrate its support to the Command’s 14-year strategic plan which “highlights its commitment to pursue genuine reforms founded on good governance and performance excellence.”

Here in the Philippines, there are lots of events that can – and do – have an effect on the economy. From the recent debates over the local labour market to natural disasters such as Typhoon Haiyan, … END_OF_DOCUMENT_TOKEN_TO_BE_REPLACED

Technology is everywhere these days, reaching into every aspect of our lives and empowering us in ways we never would have imagined in the past. With that new power comes new dangers however, and we … END_OF_DOCUMENT_TOKEN_TO_BE_REPLACED

The free tuition law will cover the tuition and fees of students enrolled in 112 SUCs, 78 LUCs, and all duly registered technical-vocation education and training programs starting this school … END_OF_DOCUMENT_TOKEN_TO_BE_REPLACED

The U.S Department of Defense is in talks with their Philippine counterpart on the acquisition of 10 AH-1W Super Cobra attack helicopters, with 2 frames possibly funded by Foreign Military Sales (FMS) … END_OF_DOCUMENT_TOKEN_TO_BE_REPLACED

The Philippine Air Force’s technical working group (TWG) has identified Sikorsky UH60 (Blackhawk) as the combat utility helicopter that would replace the mothballed Bell 412 EPIs, while the selection … END_OF_DOCUMENT_TOKEN_TO_BE_REPLACED

The United States Navy on Monday said that it is willing to give some equipment needed for the Navy modernization training of the Philippine Navy's personnel. "We can contribute, certainly from … END_OF_DOCUMENT_TOKEN_TO_BE_REPLACED