Daewoo Shipbuilding & Marine Engineering (DSME) launched the lead ship of the new Daegu-class FFX-II frigate for the Republic of Korea Navy (ROK Navy) on June 2, 2016. Key updates of the Batch II over the ASW-focused Batch I include VLS, full electric propulsion system, a towed array sonar system as well as a larger hangar that can accommodate a 10-ton helicopter (FFX-I has hangar for lighter helicopters like AW159).

FFX-II is the first South Korean warship to be fitted with DRS Hybrid Electric Drive system, coupled with Rolls-Royce MT-30 gas turbine engine for CODLAG integrated full-electric propulsion. This configuration is shared with the US Navy’s LCS and Zumwalt destroyers, as well as with the Royal Navy’s QE aircraft carriers and future Type 26 GCS. In terms of engine technology and acoustic reduction technology, this makes FFX-II one of the most advanced and ‘reduced accoustic signature’ ASW frigates among western navies. 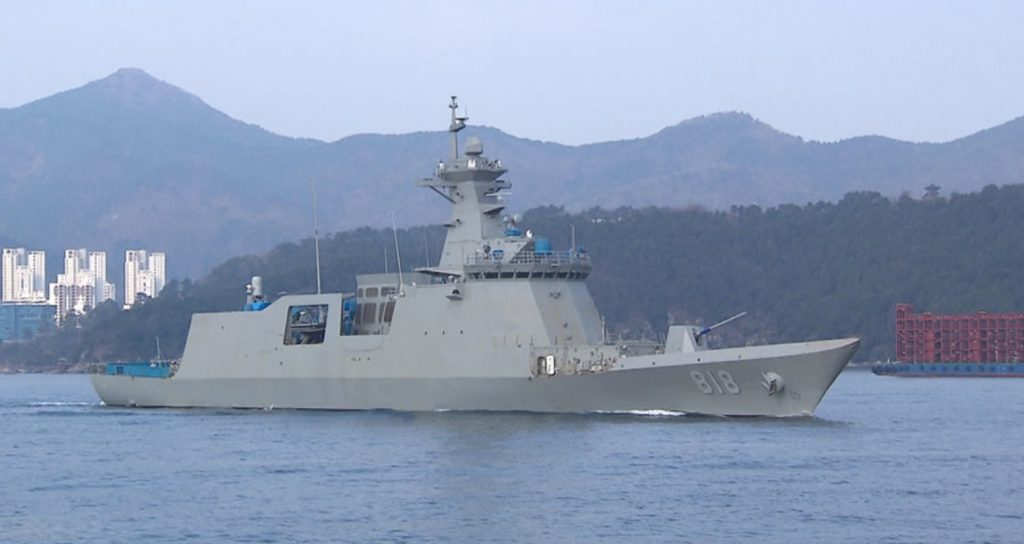 The first two vessels of the class are built by DSME. South Korea’s DAPA placed an order with Hyundai Heavy & Industries (HHI) in December 2016 to build two Daegu-class FFX-II frigates ahead of schedule to support the ailing local shipbuilding industry. These two vessels will be the third and fourth in the series.

“The Daegu is a warship with greatly improved capabilities to detect or attack such targets as ships and submarines and to defend itself from aircraft and guided missiles, compared with existing frigates and patrol combat corvettes,” DAPA said.

“The survivability of the Daegu has been maximized as it has stealth design,” said Bang Keuk-chul, head of the DAPA’s warship program team. “And it’s possible to carry out more effective anti-submarine operations with its hybrid propulsion system making less noise.”