More than 1,000 local and overseas employment opportunities are up for job seekers at the “ Mega Jobs Fair ” slated at the town plaza here on Feb. 21, according to Carmona’s Public Employment Service Office (PESO) Thursday.

He added that the Philippine Overseas Employment Administration (POEA) also commits their support by bringing in accredited and licensed overseas employment agencies for job placements in Taiwan and United Arab Emirates (UAE), among other jobs offered abroad. 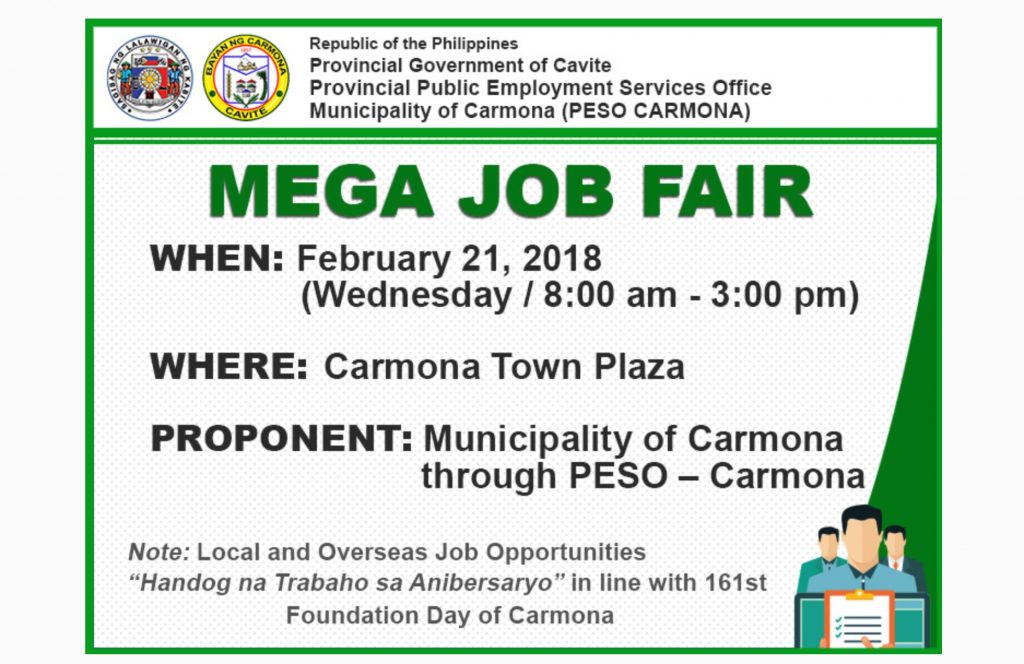 Interested companies may still participate by submitting their Letter of Intent (LOI) and Company Profile to the local PESO Office.

PESO advises the applicants to bring at least five sets of their curriculum vitae (CV), for them to maximize the time and “mass-apply” in various positions commensurate to their qualifications.

The annual Mega Jobs Fair forms part of the weeklong festivities in celebration of Carmona’s 161st founding anniversary on Feb. 20 as a town.

The town is now known as Cavite’s Sports and Investment town which officials have expressed renewed optimism that its first class town status and industrial community would finally achieve cityhood this year.

Interviewed by Philippine News Agency (PNA) Mayor Dahlia Loyola shared that the Feb 20 festivity highlight will be her State of the Town Address (SOTA) or “Ulat sa Bayan” to enlighten constituents on the progress of the Cavite’s fast-rising easternmost urban town and the local government’s bid to become a city.

Loyola said that the cityhood measure is now pending in Congress and the concerned city officials are now completing the necessary documents and legal basis.

For her part, the mayor has initiated the health lifestyle and wellness program sporting the acronym DAHLIA which stands for Direct Access to Healthy Lifestyle Invention and Advocacy, a program which marked its 12th year now last Jan. 26.

She said that the upcoming “Carmona Day” celebration has invited various sectors and the business community whose contributions have made the town its bustling community more dynamic and now a first class town.

Charmaine Distor, from the City Information and Tourism Office said the festivities would feature the unique beauty, yet wellness pageant on the “Miss Bilbiling Carmona” for overweight women to avoid discrimination and prove “fat is beautiful”.

Distor said that they are now ready for their Samyo fliers for information dissemination to Carmona constituents on the town’s yearly achievements, among other activities.

A Loyola’s Cup Golf Tournament will also be held as a yearly charitable program for indigent scholars and the day-long event will also highlight the inauguration of newly constructed buildings.

Formerly known as “Latag,” Carmona was founded in 1857 upon the order of then the King of Spain to Governor-General Fernando de Norzagaray, which led its separation as a town from Cavite’s neighboring municipalities.

Over the years, it is known to be the only town in the country that raffles off a communal land in an event dubbed “Sorteo ng Bukid” to qualified Carmona farmers every three years, which triennial tradition will be featured in 2019. (with reports from Joshua Ganoy-OJT/PNA)