You are here: Home / Nation / After a long absence, the Philippine Air Force resumes the Sanay Sibat Exercise, an Air Defense Exercise involving our FA-50PH and S-211 aircraft.

After a long absence, the Philippine Air Force resumes the Sanay Sibat Exercise, an Air Defense Exercise involving our FA-50PH and S-211 aircraft.

So good to see our Air Force have these kinds of exercises, We wish we can have more modern combat aircraft in the near future.

The 5th Fighter Wing participated in “Sanay Sibat” exercise – the first in the last 23 years – from February 26 to 28, 2018 at Clark Air Base, Pampanga with a series of simulated combat missions.

Sanay Sibat is a live air defense exercise that provides avenue for fighter pilots to test their skills and combat readiness in various missions.

Pilots from the 7th Tactical Fighter Squadron “Bulldogs” and the 105th Fighter Training Squadrons “Blackjacks” flew a total of 61 hours in 29 sorties utilizing the FA-50PH and S-211 aircraft for the three-day exercise, which culminated with a tactical demonstration flight for the Commanding General of the Philippine Air Force, Lieutenant General Galileo Gerard R Kintanar Jr AFP, aboard the FA-50PH Fighting Eagle.

Participants of the exercise are organized into two: red defensive forces and blue offensive forces with the 580th Aircraft Control and Warning Wing and Philippine Air Defense Control Center as controlling agencies.

For this year’s iteration, the 7th TFS Fighting Eagles acted as the blue force while the 105th FTS S-211 provided assets for the notional “red country.”

At the end of the exercise, Lieutenant General Kintanar performed a tactical demonstration flight aboard the FA-50PH and broke the sound barrier at 40,000ft. Surface Attack and Air-to-Air Tactics were also flown to demonstrate the capabilities of the FA-50PH. 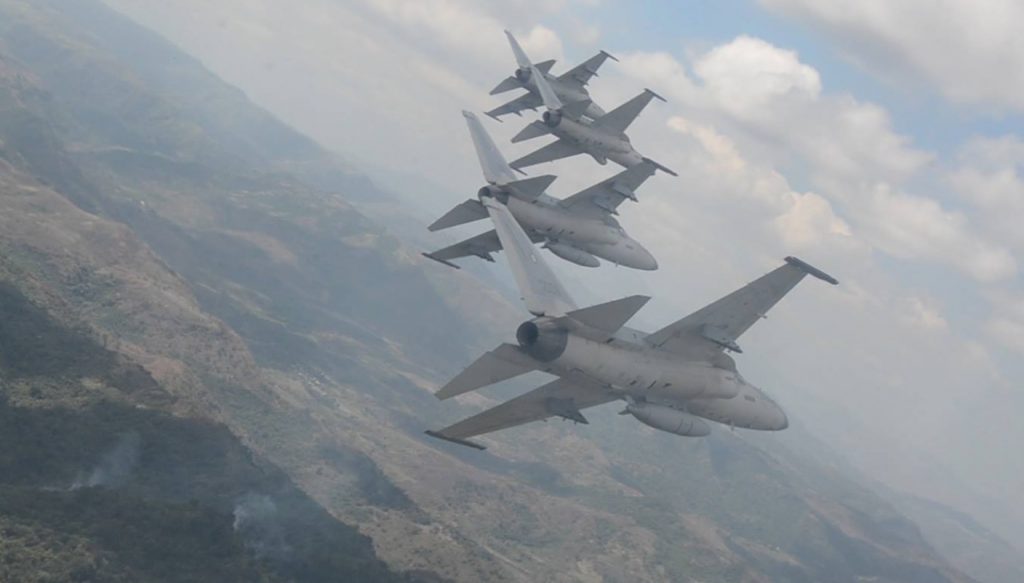 “The exercise was successful and an eye-opener…We were able to identify capability gaps that we can build on. We will continuing to conduct this exercise to enhance and strengthen our air defense competencies towards the future” said the Wing Commander, Colonel Fabian M Pedregosa PAF (GSC).

Sanay Sibat is akin to the Pacific Air Forces-sponsored Cope Thunder initiated in 1976 at Clark Air Base. The goal of Cope Thunder aimed at providing each pilots with vital missions (typically first eight to ten missions), increasing their chances of survival in combat environments. Cope Thunder was transferred to Eielson Air Force Base in Alaska after the Mount Pinatubo eruption and later re-named Red-Flag Alaska. With the withdrawal of the US Forces in Clark and the transfer of Cope Thunder, the PAF organized exercise Sanay Sibat. The exercise was last held in 1995 with the F-5 Freedom Fighters and the AS-211 aircraft.

Courtesy of Information and Historical Office of the 5th FW

Here in the Philippines, there are lots of events that can – and do – have an effect on the economy. From the recent debates over the local labour market to natural disasters such as Typhoon Haiyan, … END_OF_DOCUMENT_TOKEN_TO_BE_REPLACED

Technology is everywhere these days, reaching into every aspect of our lives and empowering us in ways we never would have imagined in the past. With that new power comes new dangers however, and we … END_OF_DOCUMENT_TOKEN_TO_BE_REPLACED

The free tuition law will cover the tuition and fees of students enrolled in 112 SUCs, 78 LUCs, and all duly registered technical-vocation education and training programs starting this school … END_OF_DOCUMENT_TOKEN_TO_BE_REPLACED

The U.S Department of Defense is in talks with their Philippine counterpart on the acquisition of 10 AH-1W Super Cobra attack helicopters, with 2 frames possibly funded by Foreign Military Sales (FMS) … END_OF_DOCUMENT_TOKEN_TO_BE_REPLACED

The Philippine Air Force’s technical working group (TWG) has identified Sikorsky UH60 (Blackhawk) as the combat utility helicopter that would replace the mothballed Bell 412 EPIs, while the selection … END_OF_DOCUMENT_TOKEN_TO_BE_REPLACED

The United States Navy on Monday said that it is willing to give some equipment needed for the Navy modernization training of the Philippine Navy's personnel. "We can contribute, certainly from … END_OF_DOCUMENT_TOKEN_TO_BE_REPLACED