The Marine Corps has chosen long-time tank-maker BAE over upstart SAIC to build its new Amphibious Combat Vehicle. A wheeled troop carrier capable of swimming from Navy ships to shore and then driving deep inland, the ACV will replace the aging, ungainly, and under-armored AAV as the spearhead of amphibious assaults. The ability to conduct such landings is the modern Marine Corps’ raison d’être — but it’s come into question, even by the Senate, in this era of long-range missiles.

The initial contract announced today was just $198 million for the first 30 vehicles, to be delivered by next fall. 30 more will come the next year, with Initial Operational Testing & Evaluation (IOT&E) and a decision to go to Full Rate Production expected in 2020. Overall, Marine officials told reporters they want to replace approximately 870 existing AAVs with ACVs “as rapidly as we can,” which will take into “the mid to late ’20s.” The current budget plan values the first 204 vehicles at an $1.12 billion. 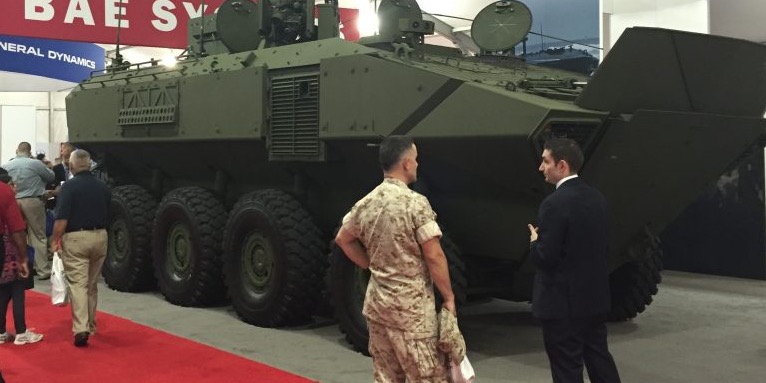 Winner BAE Systems is an international giant, the eighth largest defense contractor the US and third largest in the world. Among many other things, it builds and upgrades the M2 Bradley troop carrier and M109 Paladin howitzer, both heavy tracked vehicles, at its York, Pennsylvania factory. BAE or its predecessor companies have built every Marine amphibious armored vehicle since the amtracs of World War II.

SAIC, by contrast, started out as a consulting and services company, noted for its engineering expertise. It branched out during the Iraq War to work on MRAPS, essentially uparmored trucks. Its Charleston, SC facility installs high-grade military gear like electronics on other companies’ vehicles and upgrades the Marines’ existing AAVs. So the wheeled ACV was SAIC’s first foray into both full-size armored fighting vehicles and into manufacturing, making it the riskier option for the Marine Corps. SAIC, in a statement, said while it was “disappointed…we are committed to growing this line of business” — but failure here is a bad sign for SAIC’s other armored vehicle bid, to build the US Army’s tracked Mobile Protected Firepower (MPF) light tank.

Despite their differences, both companies offered basically similar 8×8 vehicles. Both started with foreign designs, since the US is a world leader in tracked armored vehicles but not in wheeled ones. BAE collaborated with Italy’s IVECO (subsidiary of world-famous Fiat) to offer a variant of the SuperAV/Freccia/Centauro family in Italian service since 1991. SAIC partnered with Singapore’s ST Kinetics to offer an upgrade of the Singaporean army’s Terrex. (For comparison, the main 8×8 armored fighting vehicles already in US service, neither of them amphibious, are the Marine LAV and Army Stryker, both descendants of the Swiss MOWAG Piranha).

The most obvious difference: The BAE vehicle can carry two more infantrymen. While both vehicles had a crew of three up front — driver, gunner, and commander — BAE could carry 13 fully equipped foot soldiers in the back, while SAIC could only carry 11. Since the current Marine rifle squad is 13 men, and the future squad will shrink to 12 (including a drone operator), that may have been a crippling disadvantage for SAIC.