DAVAO CITY – Philippine National Police (PNP) Chief Director General Oscar Albayalde said he supports the proposed expansion of the Davao City Police Office (DCPO) and the deployment of more cops to this city in consideration of its growing population and economic progress.

The expansion of the DCPO, the deployment of additional 500 cops and latest police directives were among the issues discussed by Albayalde during his courtesy call with Davao City Mayor Sara Duterte-Carpio on Friday. 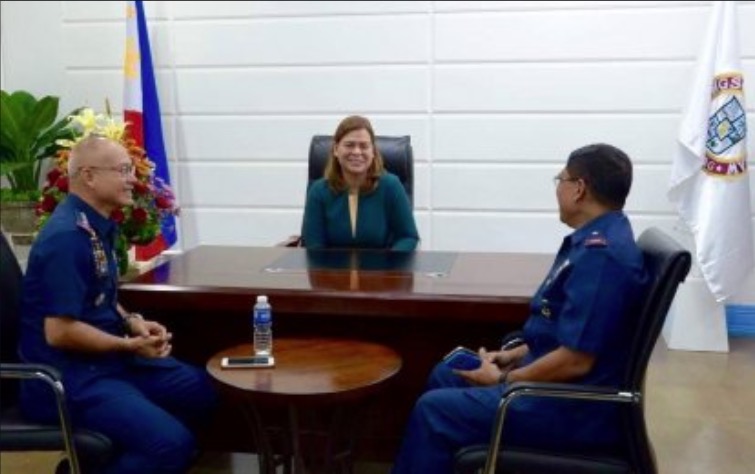 Albayalde said the expansion of the DCPO is under review by the PNP Directorate for Plans prior to its submission to the National Police Commission (Napolcom) for approval.

Albayalde assured the mayor of the PNP’s support for the proposed expansion, which means more policemen and additional police stations.

Mayor Sara said the expansion of the city police is needed given its size, increasing population, and the influx of tourists.

Under the DCPO’s proposal, the local police would get additional 1,700 police personnel to achieve the one policeman for every 500 population ratio. Currently, the ratio is one policeman to 864 population.

Four police stations will also be added in the areas of Sta. Ana, Sasa, Buhangin, and Talomo; and two more City Mobile Force Companies composed of 108 personnel to secure the city’s border areas.

The proposal is in preparation for  the DCPO’s conversion from a city police office to a police district.

In the meantime, Albayalde said he has committed to the mayor additional 500 positions to increase police visibility and effectively prevent criminality. (Lilian C. Mellejor/PNA)

Here in the Philippines, there are lots of events that can – and do – have an effect on the economy. From the recent debates over the local labour market to natural disasters such as Typhoon Haiyan, … END_OF_DOCUMENT_TOKEN_TO_BE_REPLACED

Technology is everywhere these days, reaching into every aspect of our lives and empowering us in ways we never would have imagined in the past. With that new power comes new dangers however, and we … END_OF_DOCUMENT_TOKEN_TO_BE_REPLACED

The free tuition law will cover the tuition and fees of students enrolled in 112 SUCs, 78 LUCs, and all duly registered technical-vocation education and training programs starting this school … END_OF_DOCUMENT_TOKEN_TO_BE_REPLACED

The U.S Department of Defense is in talks with their Philippine counterpart on the acquisition of 10 AH-1W Super Cobra attack helicopters, with 2 frames possibly funded by Foreign Military Sales (FMS) … END_OF_DOCUMENT_TOKEN_TO_BE_REPLACED

The Philippine Air Force’s technical working group (TWG) has identified Sikorsky UH60 (Blackhawk) as the combat utility helicopter that would replace the mothballed Bell 412 EPIs, while the selection … END_OF_DOCUMENT_TOKEN_TO_BE_REPLACED

The United States Navy on Monday said that it is willing to give some equipment needed for the Navy modernization training of the Philippine Navy's personnel. "We can contribute, certainly from … END_OF_DOCUMENT_TOKEN_TO_BE_REPLACED