PUERTO PRINCESA CITY, Palawan –The Philippine Coast Guard District (PCGD)-Palawan showed off Monday the recently acquired “anti-terrorism fast boat” that has the capability for night operation and with a mounted 30-caliber machine gun. 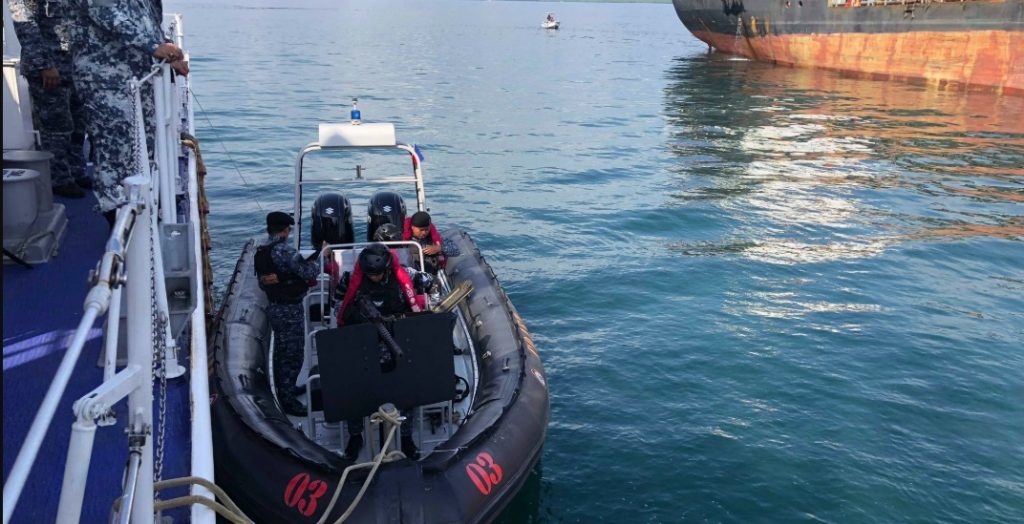 He said the boat can deliver “dependability, style, and confidence when taking control of the coastal water,” adding that it can accommodate 12 anti-terrorist personnel of the PCGD who will ensure the safety of the province’s coastal zones against any threat from extremist groups like the Abu Sayyaf.

“We fitted it with a caliber 30 machine gun and we placed a personnel who can operate it. It can really act as anti-terrorism fast boat here in Palawan,” he said.

He said it was sent to the province two weeks ago by Coast Guard chief Admiral Elson Hermogino in fulfillment of President Rodrigo Duterte’s pledge to help the province in preventing the perpetration of terroristic activities.

It was a share of the donation of the Japanese government, which was requested by President Duterte for the PCG to have additional maritime assets, he said.

“Ano yan donated ng Japan government. Sometime ago, nag-request si President [Duterte] ng fast boats and they gave freely. Pito yan ang alam ko, at ang isa ay nabigay dito sa Palawan (It was donated by the Japan government. Sometime ago, President Duterte requested for fast boats and they gave freely. As far as I know, there are seven units and one was given to Palawan),” he said.

The anti-terrorism fast boats, he explained, has an apparatus to avoid running aground in shallow areas and has a propeller guard to get around coral heads.

He said the RHIB will be supported by some of the 44-meter MRRV class patrol vessels whose design and built were financed with the Japanese government’s support.

One of these is 4407 BRP “Sindangan,” which is already helping secure Palawan’s littoral areas.

“We will have floating assets dedicated to the east and west of Palawan, and we have so many aluminum boats, and this new asset that we are launching – the fast boat – this is for interdiction in our patrol,” he said.

Interdiction, he explained, as “it is fast, complete with navigational equipment and can operate at night with the 30 caliber firepower machine gun aside from the M16 rifles of the anti-terrorist personnel.”

Toribio urged the public to help the Coast Guard, the military, the police, and the provincial government in ensuring the province’s safety by being alert and vigilant, especially in seaside communities.

The launching of the anti-terrorism fast boat came a barely a week after the Abu Sayyaf threat to conduct kidnappings in Palawan was disclosed by the Palawan Provincial Peace and Order Council (PPOC) on Aug. 11. (PNA)

Here in the Philippines, there are lots of events that can – and do – have an effect on the economy. From the recent debates over the local labour market to natural disasters such as Typhoon Haiyan, … END_OF_DOCUMENT_TOKEN_TO_BE_REPLACED

Technology is everywhere these days, reaching into every aspect of our lives and empowering us in ways we never would have imagined in the past. With that new power comes new dangers however, and we … END_OF_DOCUMENT_TOKEN_TO_BE_REPLACED

The free tuition law will cover the tuition and fees of students enrolled in 112 SUCs, 78 LUCs, and all duly registered technical-vocation education and training programs starting this school … END_OF_DOCUMENT_TOKEN_TO_BE_REPLACED

The U.S Department of Defense is in talks with their Philippine counterpart on the acquisition of 10 AH-1W Super Cobra attack helicopters, with 2 frames possibly funded by Foreign Military Sales (FMS) … END_OF_DOCUMENT_TOKEN_TO_BE_REPLACED

The Philippine Air Force’s technical working group (TWG) has identified Sikorsky UH60 (Blackhawk) as the combat utility helicopter that would replace the mothballed Bell 412 EPIs, while the selection … END_OF_DOCUMENT_TOKEN_TO_BE_REPLACED

The United States Navy on Monday said that it is willing to give some equipment needed for the Navy modernization training of the Philippine Navy's personnel. "We can contribute, certainly from … END_OF_DOCUMENT_TOKEN_TO_BE_REPLACED