SEOUL — An interim report from a joint investigation into a fatal crash of a South Korean Marine Corps helicopter indicates that defects in the main rotor mast likely caused the accident, according to military sources. 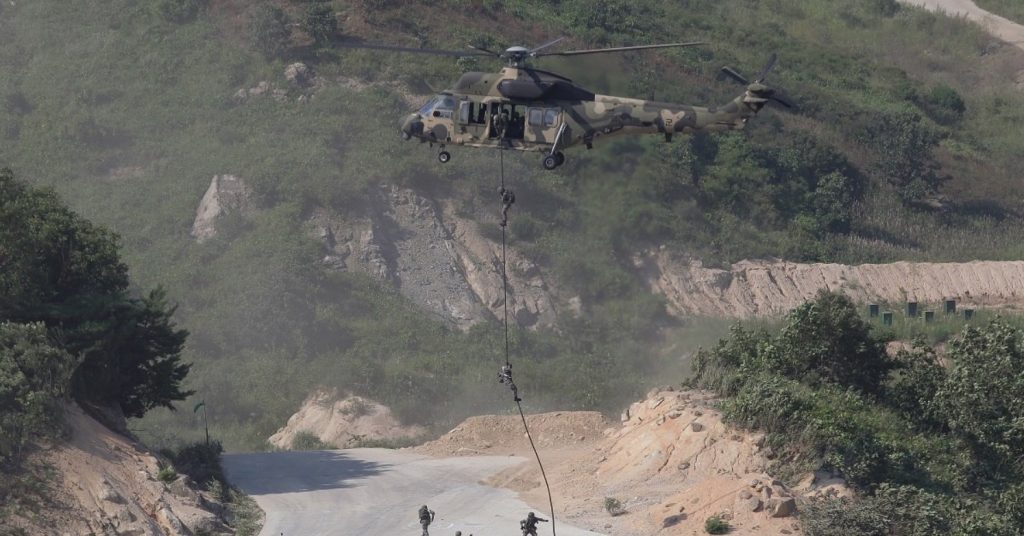 The crash of a Marineon, a modified variant of the Surion KUH-1 utility helicopter, occurred July 17 during a test flight at an airfield in the southeastern port city of Pohang. The crash killed five troops. Closed-circuit video footage showed the rotor blades fell apart shortly after takeoff.

The rotor mast in question was supplied by Airbus Helicopters, but manufactured by an Airbus contractor, according to investigators. Airbus is the main partner of the Surion development with Korea Aerospace Industries under a 2006 deal.

The joint investigation team, which involves civilian and military experts as well as observers, was launched Aug. 8 to find the cause of the accident. Airbus officials are participating in the probe.

“The interim results will be reported to the Ministry of National Defense this week before announcing them by Sept. 17,” a Marine Corps spokesman said. “Investigators have tentatively concluded that cracks in the rotor mast of the Marineon was a main cause of the crash.”

A member of the investigation team told Defense News that his team had found defects in a set of three rotor masts imported from Airbus during parts inspections.

“We found that the strength of a set of three rotor masts imported from Airbus was far lower than the standard, and one of them were confirmed to have been fitted in the crashed Marineon,” the investigator said, speaking on condition of anonymity. “Two other rotor masts in question were fitted in two other Surion troop-carrying helicopter[s] flown by the Army.”

The investigator said Airbus officials have confirmed the defects in the rotor masts.

“As a key supplier, Airbus Helicopter[s] is providing both the manufacturer KAI and the (Korean) authorities every assistance required on this investigation,” Belinda Ng, head of external communications in the Asia-Pacific region, said in a statement. “Although the company cannot respond to ongoing speculation in the media ahead of the preliminary report, there is currently no requirement for follow-up safety actions on any aircraft in our global fleet.”

About 90 Surion helicopters of the South Korean Army have been grounded since the accident. Other civilian Surion variants also stopped flight missions.

“We’ll keep cooperating to establish the cause of the accident and take proper actions to respond to the results,” a Korea Aerospace Industries spokesman said.

The KAI spokesman said the discussion of exporting Surion helos to the Philippines could restart on the occasion of the third Asian Defence, Security and Crisis Management Exhibition and Conference to be held in Manila from Sept. 26-28.

Before the accident, KAI raised hopes for exporting the Surion for the first time, as the Philippines was looking to buy the helicopter as part of efforts to modernize its armed forces.

During his visit to Seoul in June, President Rodrigo Duterte requested South Korean authorities display the Surion so he could board and examine the rotorcraft. Dutere showed interest in purchasing Surion helicopters particularly after his government canceled a deal to acquire 16 Bell 412EPI helicopters from Canada.

Pundits, however, believe it could take time for KAI to rebuild its credibility on Surion’s safety in the wake of the accident.

“KAI is not free from its accountability for quality control of products, even if an Airbus contractor is found guilty for delivering defective parts,” said Shin Jong-woo, a senior analyst at the Korea Defense Security Forum, a Seoul-based think tank. “Investigators may have to look into other possible causes of the accident to prevent recurrence of accidents.”

Said Ahn Young-soo, a researcher at the state-funded Korea Institute for Industrial Economics and Trade: “It’s going to take some time to rebuild Surion’s credibility after the fatal crash, but once the cause of the accident was discovered without critical problems with the aircraft design and others, export bids could restart.”

South Korea chose Airbus Helicopters for a new light helicopter development project in 2015. Under the $1.4 billion agreement, South Korea would develop a lightweight helicopter with a gross weight of about 4.5 metric tons for both civil and military purposes.

According to the agreement, the helicopter would be designed on the basis of the Airbus H155, a wide-cabin derivative of the 1970s-era AS365 Dauphin. The civilian variant would be developed by 2020 and the military version by 2022, with the aim of supplying about 400 units domestically and exporting some 600 units.